ARE ALL CULTURES EQUAL?

Gabriel Wilensky
H istory has shown us that the so-called “advanced” or “progressive” societies have been in certain regards as uncivilized as the “primitive” ones they conquered. Western Civilization has always been quite savage under the—sometimes not very good—cover of advanced civilization, from the Spartans throwing “useless” girls and malformed boys off a cliff to Roman bloodthirstiness to the horrors of the Dark Ages (under the veil of Christian devotion!) to the moral corruption of the Middle Ages.

Compare the “primitive” societies of the Americas and those of Africa and the Polynesia with the European societies that brought them “modern” technology, culture, and Christianity. Were these cultures equal? Can we honestly say the Europeans were more advanced? Why? Because they had muskets instead of bow and arrow? Because they believed in one god instead of many? Were these Europeans really less primitive than the peoples they colonized?

Most of the people in the “advanced” societies that conquered the “primitive” societies did not believe that the universe operated according to natural law, but rather believed it did through supernatural powers. And just like the “primitive” societies they conquered and decimated, the Europeans did not believe that by observing nature and applying reason through the scientific method, people could understand natural law and successfully apply that understanding to the task of living on Earth.

No, rather they read the Bible believing it was the immutable word and law of God and blindly followed the Church’s dictates. They did not think that by assuming self-responsibility, each individual could shape the course of his own life, rather than being controlled by the tribe, but rather they accepted their life was in the hands of God and/or the Church. What the “more advanced” societies definitely had was better technology.

Most of the people in the “advanced” societies that conquered the “primitive” societies did not believe that the universe operated according to natural law, but rather believed it did through supernatural powers.

Unfortunately, the ideals of the Enlightenment are not as prevalent as we would like (and as they should). Recent polls show that more than 90% of Americans believe in God. A large number of those think that evolution through natural selection is not only wrong, but evil, and truly believe that the Creation, as narrated in the book of Genesis, is actual and indisputable truth.

We are talking about millions of people who do not believe the Scientific Method is—so far—the best epistemological system we have, and also the only system that has proven to consistently provide correct answers to questions about the natural world, time after time. The Scientific Method opposes the dogmatic view, and it is a self-correcting system.

To the millions of religious people —the nice couple next door, you could say—the word of the priest (or God) has always been more significant than that of the scientist. To them, if the Bible says that sodomy (or whatever) is bad or wrong, it’s enough to burn those people’s houses or lynch them. Even to this day, at the beginning of the 21st century, there are people in the “advanced” societies who refuse to accept modern medicine and prefer to see their family members die of some disease while they pray by the bedside. It was only a few years ago that the Pope officially acknowledged that the Church had made a mistake in condemning Galileo for supporting Copernicus’ heliocentric theory… To me, they are not any less primitive than any society we wish to call “primitive”. We are not any better than them just because our telephones work.

Unfortunately, the ideals of the Enlightenment are not as prevalent as we would like (and as they should).

It is very important to be aware of the memetic heritage any social group has, and how that determines the identity of the group. Ethnicity—determined by their gene pool—is clearly not the factor that matters the most: there are myriad of different groups who share a Caucasian, or black, or Polynesian, American Indian or whatever origin and yet they can be not only totally different but also mortal enemies. The differences are cultural.

Culture evolves and propagates through a memetic process in a way analogous to the way genetic evolution occurs: through Natural Selection. The memes that conform a society—the beliefs, ideas, thoughts, hopes—go through a constant battle for survival, exactly as our genes do. The memes that survive are those that can replicate, that is, they get transmitted to another brain which in turn transmits it to another brain and so forth.

The memetic pool of the western powers which “conquered” the world were spread and inculcated in the colonized societies that endured them. The Jesuits had (have?) the specific purpose of proselytizing the Catholic creed. The Mormons are one of the most phenomenal cases of successful memetic propagation in modern times. But this is not limited to the great religions and/or ideas: even simple memes like “Say no to drugs!” get propagated.

In the history of the world many cultures have come and gone. Not all these cultures were equal. Some of those cultures were seminal in their advancement of human thought, such as that of the ancient Greeks; some others were the incarnation of evil, such as the one that flourished in Germany during the Nazi period.

The reasons for their demise are numerous and irrelevant to this discussion; what matters is that whether their legacy survives or not happens through a selection process. Their memes either propagate or not: there are a limited number our brains can deal with, so the competition for survival (replication) is very tough.

When someone is faced with the option of having a refrigerator where to preserve food fresh or have to deal with spoiled food, or when someone has to choose between a proven penicillin shot or the local shaman’s incantations, etc., it is very likely that, if the person really has a choice, they would choose the former.

From this regard we call the societies that subscribe to the latter ideology “primitive”, in the sense that they maintain an epistemological system that has—historically speaking, at least—not advanced. Culture evolves and propagates through a memetic process in a way analogous to the way genetic evolution occurs: through Natural Selection. Know whom to trust when you hear multiple opinions 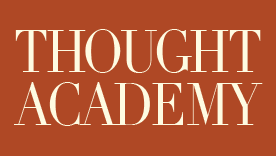 Do You Want to Further Develop Your Critical Thinking Skills?

Enter your name and email and we'll send you a FREE list of awesome critical thinking books that will help you become a better thinker!

You Probably Believe All Sorts of Unbelievable Things

Thank you! Check your email to download the test.